In honor of the launch of Wildland, we give you a 15% discount on purchases during the week! The game is available on Steam and itch.io.

We have appointed a release date for the game - July 25, 2019! On this day, the game will be available for purchase on Steam and itch.io. And now we offer you the official trailer of the game and the description of the game from the developers.

Wildland is a car survival game in the post-Soviet world. The player enters the Last Commune - autonomous area, which never recovered after the collapse of the great country. The goal of the player is to survive in conditions of limited resources and help the inhabitants of the Commune to restore the most necessary things for normal survival. The player has 8 Soviet-made SUVs + 1 bonus car. Each machine has its own unique character and technical characteristics: weight, capacity, maximum speed, volume of fuel tanks and fuel consumption.

In the course of his adventures, the player will have to complete the tasks of the residents of the Commune associated with the transportation and search for resources. All tasks in the game are generated, so the game events are unique. To complete the game, the player must complete 100 tasks and, if desired, after passing the game, the player can remain in the Commune and continue to explore the world or complete the tasks. The places where you can find something useful are scattered throughout the territory, but you will have to search for them yourself, in the Last Commune there is no GPS navigation, no Google Maps, only a compass. In addition, local residents do not like being stolen from them - every theft, like the execution of tasks, affects the player's reputation. If a player has a positive reputation, then local residents will make discounts on their services and products. If the player spoils his reputation, then everything will get more expensive.

The player is extremely important to monitor their own needs and the condition of the car. The need for food and water affects health, and timely sleep is a guarantee that the player’s body does not turn off at the most inopportune moment. A car with an empty tank will not go anywhere, just like a car, the technical condition of which can be described as "dead." In addition, overloading the car also affects its technical condition. And the technical condition itself affects the dynamic characteristics of the car and its ability to move across rough terrain. The car can be repaired, repainted or changed at any time, in any of its condition. What can be said about the health of the player - it decreases in case of accidents, hunger or thirst and is replenished when taking medicines, food or water. Death in the game - the event is final and irreversible. If a player dies, then the current game stops altogether and it is impossible to boot and start from the previously saved location, all that remains is to start the game again. By this we want to make the player appreciate the life of his character and assess the risk of one or another action.

Saving in the game takes place automatically upon the occurrence of certain events: performance or failure of the task, buying a new car, repairing or painting, refueling or restoring the car, as well as a player’s dream or leaving the game.

The game has a dynamic change of time of day, as well as a dynamic change of weather. The range of products from each resident of the Commune changes every few days, and every week, but on different days of the week the range of cars on the car market is completely updated - the only place in the game where you can change the car. Also, fuel reserves are replenished once a week at a gas station, so it is important to properly manage existing stocks. Every day, the inhabitants of the Commune trade among themselves, so any product that the player has looked after but has not bought, can be sold to someone else.

There are 7 key places in the Last Commune (5 immediately known: gas station, car repair shop, car market, warehouse, pumping station, and 2 to be found), where a player can replenish the supply of important resources for survival (fuel, spare parts, water, food) or use one from services (repair, painting, refueling, selling cars). Performing tasks of one of these places. the player increases the well-being of this place and increases the supply of available resources or opens a new service.

Currently the game is developed in Russian and fully translated into English (some of the texts are translated by machine translation). Further translation into other European languages is planned.

Our game is absolutely ready! There was only a small polishing and preparation of presentation materials. We are very impatient to show you the results of our work. Within 2 - 3 weeks we will publish the finished game on the itch.io. In the meantime, we bring to your attention a movie containing the main gameplay elements. 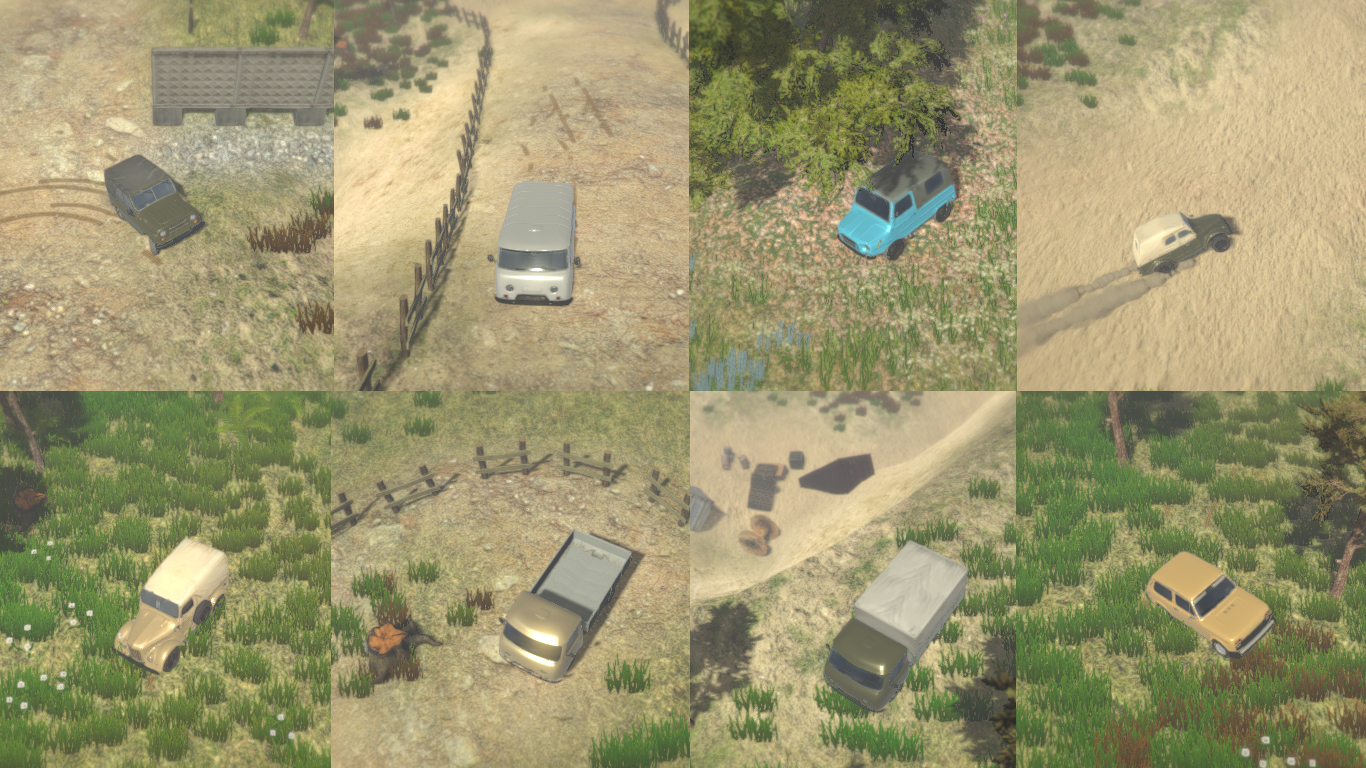 Investigating the Last Commune, the player will be faced with the need to monitor both his own condition and the state of his car. The player will need to eat, drink and sleep (by the way, he does it without leaving the car), and getting into an accident, he will receive injuries that need to be cured. The car will require timely refueling, as well as periodic maintenance - in such a harsh place parts wear out quickly. To satisfy his needs, a player will need money and resources that he can get by exploring the game world, fulfilling the tasks of its inhabitants or sharing things with them. The tasks will be generated indefinitely until the player himself dies or the Last Commune dies.

To help the entire Commune, one local resident organized the supply and restoration of old Soviet SUVs, so don’t be surprised if there are enough cars in this region where there are no roads left, there are plenty of them here, they are a means of survival. Each car has a number of technical characteristics, such as weight, speed and capacity.

You can take a look on a game fleet in basic colors right now. Next time we will share with you new detail about the game, stay in touch. Subscribe to us Vkontakte, Facebook or Twitter and follow the development of the game on itch.io.

Yesterday we reached the second milestone. This means that not only all models but also the game world are ready in the game. After a little polishing and adding details, we proceed to the sound effects and special effects. Next time we will tell you about the transport used in the game and some aspects of game mechanics.

03/25/2019 Welcome to the Last Commune! A wild land that never recovered after the death of the Soviet Union...

Welcome to the Last Commune! The wild land, which never recovered after the death of the Soviet Union: most people left their native land, fertile fields are not cultivated, forests and meadows swallowed up the abandoned and destroyed infrastructure, inherited from the once great country. Only a few remained to survive in this harsh place. And a few of the rest are ready to help their countrymen. You are one of them! Get behind the wheel of one of the Soviet SUVs and help people in a difficult situation. And remember - if you survive, the Last Commune will survive.

Wildland is one of our oldest, previously unannounced projects, and has the highest development priority. We will keep silent about how many times the concept of the game and its name have changed before today's day came, but now our idea has found the most complete form and is ready to appear before the whole world. We combined in our game car driving with survival, the result turned out to be quite an interesting concept: the player travels around the game world on the car, without leaving it and at the same time is forced to monitor both its own health and technical condition of the car, and it is very important - if the car “dies”, then the player’s character will soon die. Platform: PC.